What's good for foreigners in Portugal? 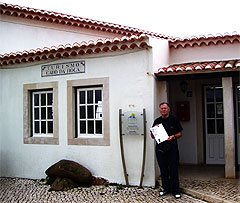 Many foreigners vacationing in Portugal prefer to travel
Portugal has been one of the major tourist destinations in Europe. Portuguese housing sector is always ready to offer tourists a wide range of opportunities for recreation whether it is a villa in Algarve, Lisbon apartments or private hotel in Porto. And as in any other country in the world Portugal has its pluses and minuses. The Portugal News edition decided to find out how critical they are for foreigners.

In Portugal under the order of The Portugal News a survey was carried out among more than thousand expats - representatives of other countries, who have chosen Portugal as a temporary residence. The survey was connected with economic situation and tourist tastes of the country’s visitors.

The study found that only 8.9% of respondents believe that the economic situation in Portugal began to improve. At the same time, according to the publication, this figure is more optimistic that the results of 2009-2010, when economic growth was noted only by 6% of respondents.

42% of respondents believe that business conditions in Portugal are complicated and time-consuming.

Since the last study the number of skeptics grew by 7%.

Popularity of the current government of Pedro Passos Coelho among foreigners has also decreased. According to 2009-2010 study, 52% of surveyed expats considered Coelho actions as positive, this year 46% of respondents were satisfied with the new prime minister.

Among the companies impressive growth in popularity among the foreigners showed Ryanair Irish low-cost airline, which services were used by 23% of Portugal visitors compared with 12% in 2009-2010. At the same time the favorite airline of The Portugal News readers was easyJet with 30% of respondents. Against the background of the expansion of low cost air carriers, growth in popularity of the Portuguese national airline TAP was quite significant and reached 3%. Today 10% of respondents participated in survey use its services for travelling to Portugal.

Shopping in Portugal. Foreigners prefer Continente - the largest supermarket chain of Portugal. 23% of expats prefer to buy goods in Continente. The second place is held by Pingo Doce stores, where prefer to go shopping 17% of respondents. Among other popular retail chains were called Apolónia and Lidl. The most popular car among expats in Portugal was Honda. Mercedes is on the second place, while the third was shared between Renault and Citroen.