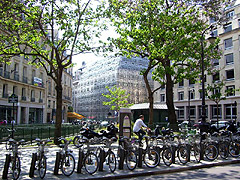 Bicycles in Paris - another European capital, which claims to be the world bicycle center
Vienna city administration announced plans to expand the network of bicycle lanes. It is planned to build new tracks and increase the length of the existing bicycle lanes by 20 kilometers. Thus, the total length of bike lanes in the Austrian capital will reach 1,220 km.

The intent of construction of new bicycle lanes was announced by the Vice-Mayor of Vienna for ecology Maria Vassiliaku. She said now are being developed about 24 projects on improving bicycle infrastructure of the city.

Main works will be conducted along the Ringstrasse and the historic center of Vienna - the Innere Stadt. According to the Austrian Independent, another area for bicycle expansion promises to be Donaustadt district.

Maria Vassiliaku expects that the planned work on improving the urban transport infrastructure will allow cycling to reach 10% share in the total percentage of the metropolitan traffic by 2015.

Since 1993 the share of bicycle transport in the overall structure of public transport in Vienna is growing steadily. In 2009 it was amounted up to 6% doubling since 1993.

At the same time the number of walkers in Austria is also growing. And the city authorities also intend to create comfortable environment for them. In particular, several streets of Vienna will be made pedestrian.

Now in Vienna there are about 660 thousand cars. This figure has not changed nearly for the last 3 years despite the fact that the population of Vienna has grown steadily and now reaches 1.7 million inhabitants.

Today many cities of Europe claim to be the bicycle capital of the world. Among them are Amsterdam, Copenhagen, Trondheim in Norway, Berlin, Basel and Barcelona. Number of bike fans in these cities is one of the highest in the world. It is possible that in the near future Vienna will join them.