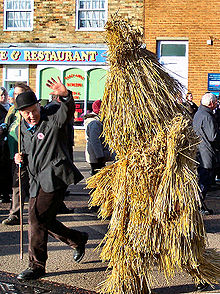 The small town of Whittlesey, which is located in the east part of the Cambridgeshire, once a year turns into a center of the ancient Straw Bear Festival. And although England thoroughly keeps its customs, Whittlesey is, probably, the only town in the country, which still celebrates it. Straw Bear Festival is held on the second weekend in January (in 2012 January 1-15) and its history dates back to the pagan rituals. Most historians believe that the core of the Straw Bear Festival was formed by several ancient festivals, such as Shrovetide, the holiday of harvest and fertility, as well as the anti evil spirit rituals.

The main event of the modern holiday is leading a person dressed up as a bear from the early Saturday morning. The costume is traditionally made of straw, which the farmers specifically leave for celebration right after the harvest. The "bear" is accompanied everywhere by the "trainer", a man dressed in a neat suit and a bowler hat. Straw bear goes from house to house dancing and performing different tricks for a small fee - treats, tobacco or alcohol. He is followed by the festive procession of musicians, dancers, artists, and spectators. Despite the fact that the festival has pagan roots, during the procession musicians traditionally perform hymns. Procession ends in one of the greatest pubs in the city center. Sunday is not so popular, so the main event of the day is burning the straw bear "skin".