The best European taxis are in Barcelona 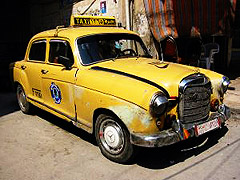 The best European taxis are in Barcelona

European taxis were independently evaluated by the experts. EuroTest program, which objective is to optimize the transport infrastructure in cities across Europe, conducted a study on the quality of taxi services in 22 European cities. As a result the highest rank was occupied by Barcelona.

The EuroTest study involved 18 European automobile clubs from 17 countries. In each city were conducted 10 test races, in which the inspectors dressed as British businessmen tried to determine the quality of services, evaluating them on more than 60 parameters. Each parameter was evaluated on a 4-point scale: "very good" "good," "medium," "bad" or "very bad".

It is worth noting that no one city, which took part in the study, was able to get the "very good" mark. In addition to Barcelona "Good" mark was given by EuroTest to Cologne, Berlin, Lisbon, Monaco, Paris and Milan, according to ilsole24ore.com

"Meduim" got such cities as Oslo, Brussels, Geneva, Hamburg, Rotterdam, Salzburg, Zagreb, Zurich and Rome. "Bad" taxis are in Amsterdam, Luxembourg, Madrid, Prague and Vienna. And "very bad" taxi services are in the only European city - the capital of Slovenia, Ljubljana.

The study showed that in European cities there is no more or less unified tariff policy on taxi services. Thus, when calculating the cost of a 7-km trip, the most expensive services were in Switzerland. In Zurich the average cost of a taxi trip is 31.35 Euros, in Geneva - 28.77. Next most expensive cities were in Northern Europe (Oslo, Rotterdam and Amsterdam), where for the same trip you will have to pay from 22 to 25 Euros. The most economical taxis are in Lisbon and Zagreb (8-9 Euros). In Prague, Spanish and Italian cities the average taxi trip price is around 11-12 Euros.