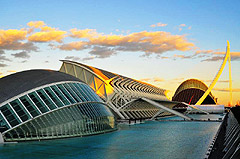 The culture and arts city of Valencia. Valencia is of the most popular town in Spain

Tourism in Spain revives after crisis. It can be proved by the data of the FRONTUR tourist group. The information is related both to the rental sector and hotel industry in Spain.

According to the FRONTUR report, in August 7.64 million tourists visited Spain, which is by 9.4% higher than in August 2010. Thus, August 2011 was a record month in the history of Spanish tourism.

In total, since the beginning of 2011 the country was visited by 40 million tourists, which is by 7.8% higher than for the 8 months of 2010. The Ministry of Industry of Spain, which prepares the statistical tourism report in the country, announced that 2011 may be among the top four years for Spain in terms of growing tourism revenue.

The biggest fans of Spain are still British. About 9.5 million tourists came to the resorts of Spain from the UK. The significant growth of tourist flows is observed among the Americans (16.7%), Germans (12.3%) and Italians (10.5%). The number of tourists from India is also grown significantly. During 8 months of 2011 Spain was visited by 53 000 tourists from India, which is by 35% higher than in 2010.

The most popular regions of Spain are Catalonia, the Balearic Islands, Andalusia and the Canary Islands. Since the beginning of the year 1.9 million tourists visited Catalonia. In addition to the four leaders growth of tourism flow is marked in Valencia (737 000 visitors) and Madrid (550 000 visitors).

One of the reasons for the growing popularity of the Spanish resort regions is expanding of the number of directions offers by such low-cost airlines as EasyJet and Ryanair. The most visited island in Spain is Mallorca.