Marine Park on Tenerife will be opened even in autumn 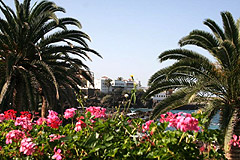 Holidays on Tenerife are popular both in summer and autumn

Built in 2004, the project of a water park by the artist and architect César Manrique during many years remains a major tourist attraction. Traditionally the Parque Maritimo Cesar Manrique receives its first visitors in early May, when begins main the influx of tourists to the island, and closes in mid-September. Until recently the situation remained unchanged. But after considering wishes of the local residents and those tourists, who prefer to visit the resort in low season, the administration of the Marine Park has decided not to close it after the end of the summer season. For this purpose last year in the Parque Maritimo Cesar Manrique started renovation of three outdoor swimming pools with sea water and some of the most popular rides, which ended six weeks ago.

According to Victor Gonzalez, the director of the water park, only the technical part of the park equipment was reconstructed. Its appearance remained the same as designed by Cesar Manrique and the Parque Maritimo Cesar Manrique is still an ideal place for family holidays. But now tourists can visit it all the year round. And though the analysts suggest reducing the number of visitors in autumn and winter, in their opinion it will not fall by more than 30%.

Tenerife is the largest island of the Canary archipelago. Due to the unusually mild and constant climate it is called "The Island of Eternal Spring". And the natural diversity on the island is so huge that Tenerife is compared with the continent in miniature. Mountain ranges and river valleys, rain forests and sand dunes - all the contrasts of nature are reflected in the island’s landscape. And due to this fact Tenerife is rightly considered as one of the world's best resorts.