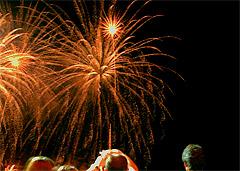 On September 24 will be held the 5th final stage of the International Fireworks Competition in Hannover. The capital of Lower Saxony for the 21st time organizes such event in the magnificent Royal Gardens of Herrenhausen.

Generally, the fireworks festival is held in Hannover from May to September. Five best firework teams from around the world will show their art to a strict jury and all lovers of fireworks. The format of the performances remains unchanged. Each team is given 25 minutes to conduct a pyrotechnic show, which includes not only fireworks, but also music and sometimes choreography accompanying. The international jury gives the team points for the overall impression of the show, technical execution, as well as a variety of effects and music interpretation.

This year the right to open the International Fireworks Competition in Hannover was given to the Swedish team Göteborg FyrverkeriFabrik, which won the first place in previous competition. The second stage of the festival, which took place on 25 June, was attended by the French pyrotechnics from Interméde. Then after a month break on August 27 in the Royal Gardens of Herrenhausen performed the Spanish team Pirotecnia Europlá. And on September showed it skills the Austrian team Pyrovision, which also won the first place before in 2006. The competition will be finished on September 24 by the pyrotechnic show from the Mexican team Pirotecnia Reyes. And on 25 September 2011 at the closing ceremony of International Fireworks Competition in Hannover the jury will announce the winners.

Tickets for the fireworks festival in Hanover cost 19€ for adults and 13€ for children from 6 to 14 years. Children under 6 years can attend it free of charge. The tourists wishing to visit the International Fireworks Competition in Hannover with the whole family can buy a ticket for 44€ (2 adults / 2 children 6-14 years old).