Super concert in Paris: Rock on the Seine 2011 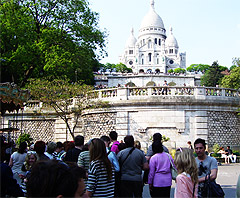 During a rock festival in Paris, traditional landmarks such as the Cathedral of the Sacred Heart, fade into the background for young travelers.

From 26 to 28 August 2011 in Paris host one of the most popular events in the musical life of the French capital Festival Rock en Seine. Rock en Seine 2011 will celebrate its eighth birthday. The festival began in 2003 with 10 teams, performed only one day today has grown to global scale music festivals till Glastonbury level. On the stage of Rock en Seine at that time performed Radiohead. Here took shape the decay of the band Oasis after a scandalous fight of brothers Gallagher.

Uniqueness of Rock en Seine is not only in composition of its participants, but also at the venue. It is hosted in the picturesque suburb of Paris in territory of park Domaine National de Saint-Cloud founded in the 17th century. Thus, garden culture of the Classical period and modern rock bit create absolutely eclectic atmosphere conducive to the special perception of music.

Festival Rock en Seine 2011 may well break the record of attendance, established in the past 2010. To look at the live performances of the headliners Queens of the Stone Age, Massive Attack, Roxy Music, Band of Horses, Arcade Fire and Beirut gathered 105 thousand people. The high popularity of the festival is the fact that season tickets of the festival sold out completely for three days. The organizers have decided to sell on the site www.rockenseine.com 500 extra tickets without reservation. The cost of a one-day ticket is 49 euro.

Present playlist of the festival doesn't fall behind of the last year. Many actual rock bands are preparing to play their live performances at Rock en Seine. At this time among the headliners announced Foo Fighters, Arctic Monkeys, DEFTONES, MY CHEMICAL ROMANCE.

From the majority of festivals of this type Rock en Seine differs by the absence of gigantic tent settlements. Everyone who is going to attend the festival stop in Paris or its suburbs. If traveler has not determine with the place of residence, tourist rental apartments of Paris from cottages-for-holidays.com may serve unpretentious and convenient solution of housing while you are visiting Rock en Seine.

The easiest way to get to the festival grounds is metro - to station Boulogne - Pont de Saint-Cloud.