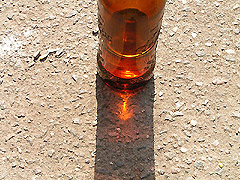 Located in central England in the Derbyshire County, the town of Derby is considered to be the capital of beer and ale, and local residents are confident that the first real ale was brewed here. In the city there is a real cult of beer, so it is not surprising that every year in Derby is held a great Derby Beer Festival.

In fact, the townspeople are very fond of beer, so they organize the festival twice a year in winter and in summer. The nearest summer fest will be held from 6 to 10 of July. This year is special for the Derby Beer Festival, because it will be 33th festival, and in 2011 is celebrated 40 years of the most beer organization in the world - CAMRA (Campaign for Real Ale), which is the organizer of the festival. So, tourists, who will visit Derby during the festival, can count on a real beer holiday. The main events will take place in the main hall of the city (Assembly Rooms). Here will be presented more than 120 kinds of beer and ale, many of which are unique and brewed only twice a year specifically for the festival. Visitors will be also able to try continental beer, often Belgian and German, but always natural, without pasteurization or preservatives.

Of course, the holiday is not limited only by Assembly Rooms. Tourists will be able to continue the fest in any pub or specially constructed beer platforms. Beer amateurs should pay particular attention to the famous Derby pork sausages. Even German connoisseurs recognize them among the most delicious in Europe. According to the tradition, at the Derby Beer Festival, apart from beer and ale, will be widely presented apple cider, which brewing traditions remained unchanged since the Middle Ages. And visitors will be entertained by street musicians and a big fair.

You can find a cottage in the UK online or book a room for a short visit of the beer festival on the portal cottages-for-holidays.com