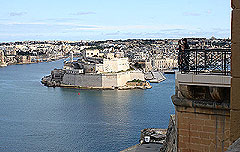 The harbor of La Valetta, the capital of Malta

During the two evenings, beginning on 30 April, on Malta there will be an annual international festival of fireworks. The opening of the festival will be held in Malta's capital Valletta (Valletta), in the Great Harbor. The venue of Fireworks Festival is chosen not by mere chance. Because of the peculiar location of the harbor the colorful fireworks and laser show will be able to observe from the whole territory of Malta.

The competition will involve pyrotechnic companies from such countries as China, Italy, Ukraine, Austria, Russia, France, and of course Malta; on it, by the way, there are more than a dozen factories producing fireworks and fireworks. The strict jury will rate the brilliance and complexity of the pyrotechnic compositions. On the last evening during a holiday concert with the musicians and dance groups, will be announced the winner. The audience will also be able to choose the best team of the festival also with the help of SMS-voting. The vestival in Malta will be fully transmitted on the local television. The hotels of Malta arrange for its guests festive evening and night shows. In addition to salutes and fireworks during the festival will be held a brilliant show dedicated to the history of the Order of Knights Hospitallers of Malta and to the great siege of 1565. Also small cafes which will offer tourists the traditional dishes of Maltese cuisine will be temporarily placed on the embankment of Laskaris.

But not only the Festival attracts tourists to the capital of Malta, which was built by the famous 1565 French Grand Master Jean de La Valletta (in honor of which got its name) after the Turkish siege. It is also a historical monument. In Valletta there are almost no modern buildings and all the houses there are only several centuries old, but there are many museums and architectural monuments. In every hotel you can book a city sightseeing tour or a thematic tour of the museums of Valletta.