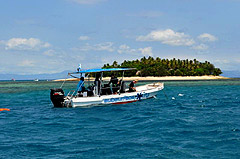 The island of Polynesia

The small island nation of Nauru located in the South Pacific has decided to attract tourists with unusual promo. "Feel yourself thin!" - this slogan was selected for the advertising company on Nauru.

Today the island of Nauru is known as a region of beach holidays. It is also one of the smallest states and the only country in the world without capital. Nauru is located only 42 km from the equator and is literally created for a leisurely pastime. However, as the island is cut off from the main tourist flows, it has to invent new ways of attracting the tourists.

As it turned out, the tiny size of Nauru is not the only distinguishing feature of this state. Among other things, the island is famous for the fact that the weight of virtually every Nauru resident has long gone beyond the standards - the majority of the Nauru population is fat.

The government of Nauru does not hide the fact that their new advertising campaign is designed primarily for the US market, where, according to the recent data, more than 74% of the population suffer from overweight.

It should be noted that the use of the overweight trend can be found not only in advertising on Nauru. Thus, the main national airline offers a special menu "eat as much as you like".

The authors of a new advertising concept note that overweight tourists can feel on Nauru like at home. They do not have to worry about shortage of food. Website gadling.com quotes Hoku Detemano – the Minister of Tourism of Nauru - who notes that it will be enough food for everyone.

The news about the beginning of the campaign, which was published on April 1, 2012, was one of the most debated topics of the island tourism press.

It is great to hear that Nauru is promoting TOURISM. It is a nice place to visit - people are good and friendly. Visit to the topside will be felt like landing on the moon. Good revenue for Nauru..............p.k.datta

Nauru is not a holiday paradise... nowhere to swim, nothing to do, this country is recovering from years of being bankrupt. The centre of the country is mined out. They locked up Australia's asylum seekers on this island prison until a few years ago and are begging to do it again. If australia agrees to open the detention centres again you will be rubbing shoulders with hundreds of people fleeing torture who are locked behind fences in the miniscule space indefinitely.

I recommend Nauru as the best vacation place on earth. It is a very quiet and peaceful place. It is a good place for diving, many Australians enjoyed from it. If you are at Meneng Hotel, you could watch sharks jumping at the middle of the ocean. You could also buy freshly catch and alive tuna fishes from the native fishermen in the morning. If you are a lover of nature and peace, Nauru is the best place to spend your vacation. All the merchandise, food came from Australia and China and also from nearby island like Fiji. Yes, they have China town in Nauru and there are also a number of chinese restaurants. By the way, they have before two hotels, one private and the other one was owned by the government. If you want peace and quietness around,o I highly recommend the island of Nauru as the best place to spend your vacation. You will not regret it.

PD, and xiaoshan, i totally agree with you. Nauru is also one of the most unusual spots in the world. The ppl are friendly and very hospital to visitors, be they refugees or tourists. To jason, fyi, the asylum seekers were treated most humanely and went freely about the island enjoying ocean swimming(which they had never done before) bike rides around the island and shopping tours around the shops. they would not get that in woomera australia, thats for sure. the refugee kids went to all the schools on the island and befriended many local kids. Nauru is not only unusual in that its like luna craters in the center, but has lovely island beaches around its coastal rim. from the beach you can catch fish for your supper, enjoy walks on the reef at low tide witnessing coral displays that nature has to offer, or simply take a fishing rod and casting into the deep blue, and do not be surprised if you reel in a fat tuna. thats the paradise it is, offering nature's contrasting landscapes all in its tiny 8.5sq miles land area.

Hi Bernadette Thank you for your comments about Nauru. I appreciate it very much. I really liked the peaceful and simple living in Nauru and glad to know that you liked Nauru also. My luckiest time in my life was when I was in Nauru--as I enjoyed every moment of my stay there. It was like a paradise for me, a heaven. I'm became very curious about Woomera, Australia? Is it nice to live there like in Nauru. I googled it and found that it was in South Australia. How do you find living there? I do not enjoy living in big cities like New York and California. They are noisy, dirty and crowded.