The new spa will be opened near Bodrum 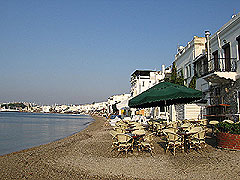 Just before the New Year in the neighborhood of the city of Bodrum, which is located on the peninsula of the same name, in south-western Turkey, the construction of the new Kefaluka Resort was completed. New hotel already invites visitors to book one of the 370 comfortable rooms, or to settle in one of the 14 magnificent residences. The hotel is located on the territory of 50000 square meters and has own sand beach, with a length of 440 m. The new hotel offers visitors a wide range of sporting, cultural and recreational services. Five restaurants will be opened there, and each of them will represent the national cuisine of the particular country. Kefaluka Resort can be also considered as a yachting center, because it will be possible to rent motorboats as well as different kind of sailing boats and yachts there. Professional instructors will help you with diving lessons, dancing and tennis.

Bodrum itself is called «the soul of Turkey», «the Bohemian city », artists gather here from all over the world, their exhibitions and galleries are an additional incentive for tourists. The city is filled with various restaurants, night clubs and bars, all these creates an atmosphere of celebration and artistry. The biggest disco in Europe is also located here. And fans of antiques and history will find an abundance of ancient monuments and museums. Bodrum is a homeland of <<the father of history>> - Herodotus. Aegean «San Tropez» - this is how Bodrum is also called. It is a city which you will never part with.

One of the most important water sport competitions of the year will be soon held in Bodrum. Videlicet, the International Windsurfing Tournament RSX 2009. In the championship, which begins on July 24 and lasts till August 9, 2009, windsurfers from 45 countries will participate.